The Report “Nutraceutical Excipients Market by Functionality (Binders, Fillers & Diluents, Coating Agents, and Flavoring Agents), End Product (Prebiotics, Probiotics, Proteins & Amino Acids, and Vitamins), Form (Dry and Liquid), and Region – Global Forecast to 2025″, The global nutraceutical excipients market size is estimated to account for about USD 3.4 billion in 2020 and projected to reach a value of nearly USD 4.9 billion by 2025, growing at a CAGR of 7.3% from 2020 to 2025. The market for nutraceutical excipients market has been growing in accordance with the rise in demand and consumption for nutraceuticals, around the globe. The consumption of dietary supplements in the form of tablets and capsules has been witnessing an upsurge demand in recent times, owing to the growing awareness for health benefits offered by these products that helps to support the wellbeing of the consumers. The key driving factors of the nutraceutical excipients market include increasing consumer concerns regarding maintaining a balanced diet and growing consumer awareness about several diseases caused due to lack of intake of necessary nutrients as a result of imbalanced dietary lifestyles. Food fortification is one of the major trends, which is also fueling the nutraceutical excipients market in the functional food & beverage industry. 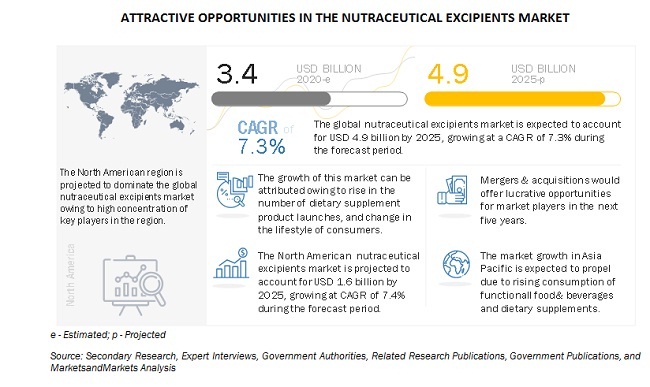 By form, the dry segment is estimated to account for the largest share in the nutraceutical excipients market in 2020

The dry form of nutraceutical excipients accounted for a larger market share, as compared to the liquid form. The popularity of the dry form can be attributed to its cost-effectiveness and convenience in multiple applications. An increase in demand for dry beverage mixes with additional nutrients, including customized mixes and consumer preference for fortified beverages are fueling the growth of the dry segment in the nutraceutical excipients market.

By functionality, the binders segment is estimated to account for the largest share in the nutraceutical excipients market in 2020

Based on functionality, binders accounted for the largest market share in 2019, followed by the fillers & diluents functionality segment. Binders are increasingly being used by dietary supplement manufacturers since these excipients are formulated to act as an adhesive to “bind together” powders, granules, and other dry ingredients to impart the required mechanical strength. Binders can also help in adding volume to low-active dose tablets, resulting in producing effective tablets with appropriate actives by holding the ingredients together. In addition, some binders also act as fillers and diluents in an array of application products, namely magnesium stearate, which is widely used as food and supplement additive. Due to factors such as versatility and vital importance in gaining product efficiency, binders are gaining traction. They are witnessing a rise in consumption as an excipient in the nutraceutical industry.

The segment estimated to account for the largest share in the nutraceutical excipients market in 2020, by end-product is the probiotics segments.

Probiotics are yeast and good bacteria that are beneficial for consumers, as they enhance digestion and gut health, improve immunity, increase nutrient absorption, and lower the chances of food allergies. Probiotic products are offered in different forms, including yogurt and drinks, and supplement forms such as tablets and capsules. However, there are two main challenges to develop a probiotic formulation viable for commercial utilization. The first one is the quality of health attributes that the probiotic organisms can confer, and the second one is the stability of the formulation till the end of its shelf life. Companies are focusing on developing and offering probiotic blend products, which includes APIs (Active Pharmaceutical Ingredient), containing probiotic formulations by using different types of excipients. Among the excipients used in these blends for probiotics formulation, mannitol was found the most suitable, which helped in the enhancement of the shelf life of end-products.

North America accounted for the largest market share in 2019. The nutraceutical excipients market in North America is dominating, owing to the concentration of the global players such as DuPont (US), Kerry (Ireland), Cargill (US), and Ingredion (US). The market for nutraceutical excipients here is mature, and hence, the growth is moderate compared to other regions. Other factors contributing to the growth of nutraceutical excipients in North American region include the busy lifestyle of consumers, prevalence of chronic diseases due to hectic lifestyles, and an increase in awareness among consumers regarding the health benefits of nutritional foods, including food supplements, which has driven the demand for functional food products. In addition, the use of technological advancements and new product launches have made excipients available for a wide range of applications in the fortified food & beverage, dietary supplements, and nutraceuticals sectors, which is projected to drive the growth of the market in the region.

pankaj sharmaBusinessAugust 16, 2022
The global commercial satellite imaging market was valued at $XXmillion in 2022, and is expected to reach $XXmillion by 2030, registering a …
END_OF_DOCUMENT_TOKEN_TO_BE_REPLACED